(Washington D.C., January 7, 2021), On behalf of the President of the Republic of Lebanon H.E. General Michel Aoun, the Ambassador of Lebanon to the United States of America, H.E. Gabriel Issa decorated the Secretary of Health and Human Services of the United States of America, H.E. Alex Azar II with the National of Order of the Cedar-Grand Officer Grade for his lifetime achievements in public service. 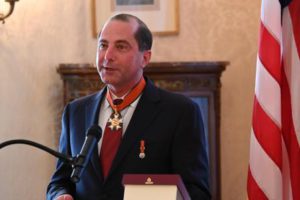 Due to Covid-19 restrictions and health concerns, the decoration ceremony was held at the residence of the Ambassador of Lebanon in Washington, D.C. and attended by the families of the Ambassador and the Secretary, in addition to select Embassy and Department of Health and Human Services officials.

The ceremony began with the Lebanese and American National Anthems followed by the Ambassador of Lebanon’s remarks in which he congratulated the Secretary on behalf of the President of the Republic of Lebanon H.E. General Michel Aoun and the Lebanese State. The Ambassador spoke about Secretary Azar’s long career in public service, achievements and why he exemplifies the contributions of Lebanese-Americans in the United States and worldwide. 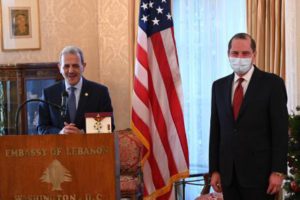 After the Ambassador’s remarks and pinning of the National of Order of the Cedar, Secretary Azar delivered his remarks.

Secretary Azar thanked Ambassador Issa for this honor and their friendship for the past years and expressed his deep gratitude to President Aoun and the Lebanese Government for honoring him with this lifetime achievement award. The Secretary said that not only it is an honor to be decorated for his time as Secretary of Health and Human Services but it is an honor of a lifetime to join the distinguished ranks of the National Order of the Cedar. He stated that not only does he view this as a recognition and honor, but also a challenge to strengthen the ties between the United States and the Lebanese people to make both nations more prosperous and healthy. 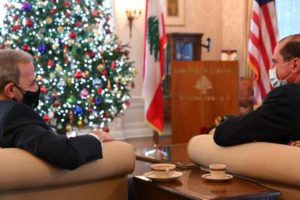 Secretary Azar acknowledged that the Department that he leads (Department of Health and Human Services) benefits greatly from the talents of the Lebanese people which includes alumni of the American University of Beirut who hold key positions at the Centers for Disease Control and Prevention and the Federal Drug Administration. He said that one of the priorities of his tenures in public service and as an American was to underscore that the talents of immigrants, including Lebanese immigrants are welcomed in the United States. 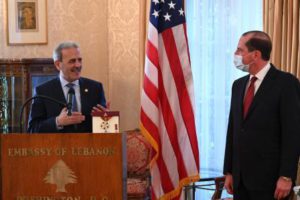 Talking about the achievements by the Lebanese worldwide, Secretary Azar referenced the most recent success of the company Moderna which has one of the world’s first two authorized Covid-19 vaccines as part of a joint effort between the company and the National Institutes of Health, part of the Department that he leads. Moderna’s Founding Chairman, Noubar Afeyan is a Lebanese immigrant to the United States. 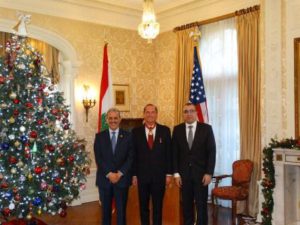 Secretary Azar thanked the Lebanese community in the United States for its outpouring support and friendships throughout the years and said that it had been so vital to sustaining him during his time at office. He also spoke about his ancestral towns in Lebanon and expressed his appreciation for the support of the communities of Amioun and Al Koura. 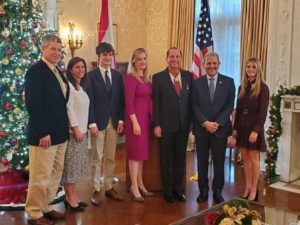 Talking about the importance of global health cooperation in light of the challenges and effects of the Covid-19 pandemic, the Secretary stated that he is proud that the United States stood by the Lebanese people during those times and during the horrific aftermath of the 2020 Beirut Port explosion. The Secretary highlighted that in 2020 alone the United States provided more than $395M in humanitarian assistance for Lebanon.  The assistance included more than $55M in Covid-19 response and more than $38M in food, medical supplies and other emergency support and the distribution of six interagency emergency health kits by the USAID which is sufficient to provide health services to over 60000 people for 3 months. 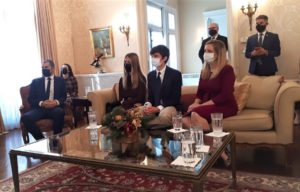 Additionally he stated that following the explosion, the Department of Health and Human Services sent experts as part of a “Dark team” to assess the impacts of Beirut’s health infrastructure and conduct an assessment on what the hospitals need to be running again.

Concluding his remarks, Secretary Azar reminded of the resilience of Lebanon and the Lebanese people and quoted the President of the Republic of Lebanon, H.E. General Michel Aoun during his speech at the UN General Assembly in September: “Beirut and Lebanon will heal its wounds and rise from the ruins, like it has risen over and over again throughout history”.

The National Order of the Cedar is the highest state order of Lebanon, awarded by the President of the Republic of Lebanon for great services rendered to Lebanon, for acts of courage and devotion of great moral value, as for years in public service.